Browsing like it's 1989, learning about Roman Britain and the Bronze Age collapse, and taking cat flaps to the next level.

Swiss Cat Ladders. Who knew this was a thing?

The trend in Switzerland for building ladders for cats throws up many questions. For example, why are they particularly popular in the country’s capital?

The CERN 2019 WorldWideWeb Rebuild. Pretty pleased that my (this) site mostly works as you’d expect on the first ever browser, but then surely all sites should, right(?) 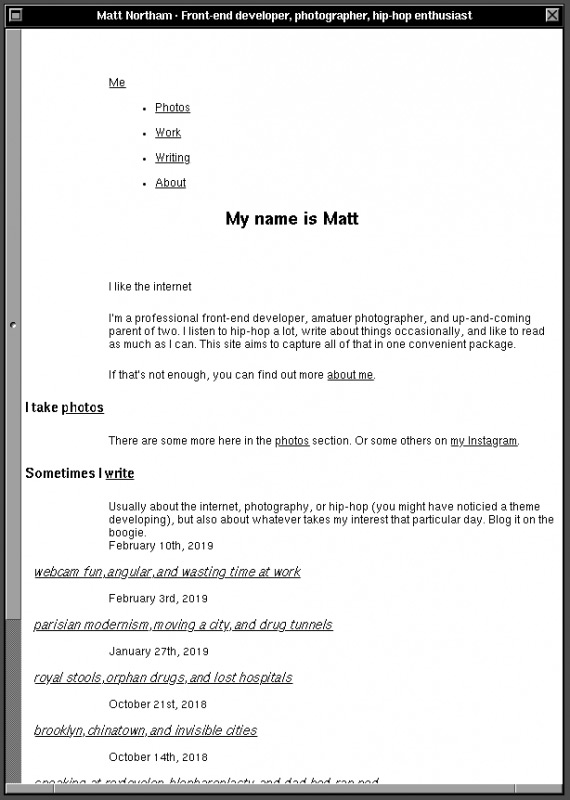 In February 2019, in celebration of the thirtieth anniversary of the development of WorldWideWeb, a group of developers and designers convened at CERN to rebuild the original browser within a contemporary browser, allowing users around the world to experience the rather humble origins of this transformative technology.

Big fan of the perpetual nature of HTML. Backwards compatibility ftw. I love that this works in a browser from 30 years ago, while I’ve also got some Flash sites laying around that are lost to eternity.

How long was it before images came into play though(?) As much as I appreciate formatted text, it’s so hard to imagine the web without images – or rather, without colour. JavaScript, I could take it or leave it, but CSS to spruce up some semantic tags, yes please.

About the last days of Opportunity, 55 million km away on Mars. It’s an awesome story, with a bittersweet ending.

Fall of Civilisations episode’s 1 & 2: Roman Britain & The Bronze Age Collapse (around the Mediterranean). Both episodes are brilliant. This is the new podcast by that Paul Cooper from Twitter who I’ve mentioned a couple of times before, and it’s a glorious expansion of some of his Tweet threads. Just after those first 2 episodes, I’ve got dozens of tabs open with things I want to carry on reading about. There’s a ton of stuff about the history of Britain (which I feel like I should’ve known about), and the bits about the Sea People in ep 2 are fascinating. Looking forward to this podcast continuing!

You can’t help but wonder what it’d take for our current civilisation to collapse. These comparatively highly advanced and established societies ended up in literal ruins, with huge chunks of their existence lost to time. Living through it, you’d imagine that no-one thought it could happen, and yet, it did. One of the themes of the Roman Britain episode is people not learning from their past… awks.

Distraction Pieces 253: Joe Cornish. There’s a lot of Joe about at the moment, what with his new film coming out, so it’s a great time to fuel my imaginary friendship with him. I had no idea he went to college in Bournemouth – literally only meters from my old office! That’s it. We’re basically mates for real now. It’s a good chat.