Exchanging letters with Tupac Shakur, listening to a lot of Louis on lockdown, and appreciating why covering your face is the LEAST you can do.

Well. What a fun few months that’s been 😐. I popped up briefly to write about having moved this site over to an Eleventy build but aside from that, it’s been hard maintaining any sort of consistency with posts. Or at all, tbh. There have been some highs, but many lows, and I’ve frequently wondered what the point is (of this blog – nothing serious, don’t worry). But then I had this interaction about The Bijlimermeer where I recalled a post I made a couple of years ago and that’s why I’ve been writing these posts. It’s an enhanced memory for me, and possibly useful to 1 or 2 other people at some point in a couple of years 🙃.

If I had been posting regularly, I would’ve mentioned: Dominic Cummings is a twat, Black Lives Matter, lockdown or not lockdown? who knows?, “Glastonbury At Home” was fun, the UK government is despicable, Black Lives Matter, sending kids back to school was weird, Dorset & Devon are both wonderful places to explore seeing as global travel is off the cards, person-woman-man-camera-tv, I officially don’t have Covid-19 (or at least, didn’t on July 22), and most of all, Black Lives Matter.

Now back to our regularly scheduled program.

I was Tupac Shakur’s pen pal.
In the 90s, I was pen pal’s with Claire who lived in Uzel, while Nina Bhadreshwar was exchanging letters with actual 2Pac. No offence to Claire près de la gare, or her deux frères, but I feel like I missed out somehow. This is an amazing story; I love it!

I was back in Barnsley a few months later when the phone rang and I asked who it was. The voice said, “It’s Tupac. You sent me a copy of your fly-ass magazine.” He asked me to keep sending it, and we started corresponding by letter.

Grounded with Louis Theroux.
Previously, I’d listened to the first 2 episodes – now I’ve got through all 10. Particularly liked the Troy Deeney chat which was refreshingly open and candid for a footballer, and definitely changed my opinion of him for the better.

Troy describes how, just as his football career was taking off, he kicked someone in the face during a fight on a night out and was sentenced to jail: “I was embarrassed and ashamed of it, but it happened, and I can’t change it”. In prison, he says, “people just told me I was an idiot, and that’s what I needed.” He remembers them saying, “You’ve got to understand how big of an opportunity you’ve got. Not only for you, but to show young kids from around our area that they don’t have to be like us.” After that, he says, “I just decided that I was going to give it a real good go.”

The KSI interview was also pretty enlightening in terms of making him come across as an actual person, and then the chats with Gail Porter, and Rose McGowan were both powerful listens. I couldn’t pick a ‘favourite’ of the series – go listen to them all!

99% Invisible 399: Masking for a Friend.
Exploring why mask usage is accepted more in China and other countries in East Asia than in the West. Primarily thanks to Dr Wu Lien-teh deducing in the early 1900s that Manchurian Plague bacteria was in fact airborne and not spread by rats.

After the [flu] pandemic ended in 1920, wearing masks fell into obscurity in the US mostly because the country did not experience many deadly epidemics, but in China, there was never an opportunity to forget. As Lynteris explains, “In China, you have a continuity of the use of the mask. So the mask story does not end in 1911 or 1918. It continues through several other outbreaks in the 20s, in the 30s. And then in Mao’s China after 1949.” Not only that, but the medical mask also plays an important role in public health campaigns and in propaganda.

Wearing a mask is an act of protecting yourself, but more importantly, protecting the people around you. It provides a sense of solidarity—that we’re all in this together.

Personally, I’ve gone for a fetching floral face covering, which I think everyone can agree is an undoubtedly stylish accessory. Already looking forward to experiencing the warming benefits when winter kicks in. 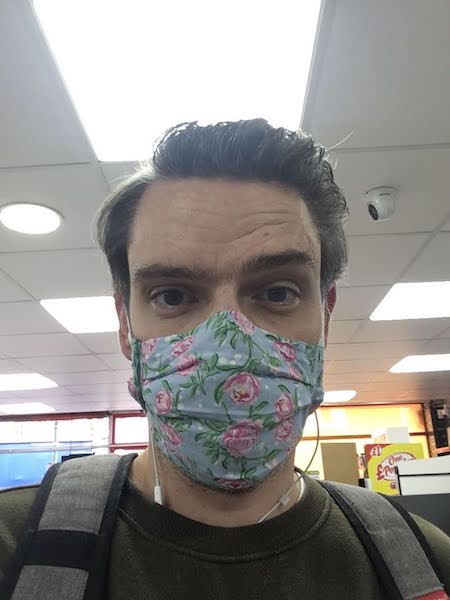