Missed a couple of weeks due to stuff, so this is a bit of a dump of the last fortnight or so.

Few episodes of Stuff You Should Know, because it gets recommended a lot and I’ve not actually listened to it before; How Going Over Niagra Works, How the Hells Angels Work, How Agent Orange Works and How Narco States Work. Sort of a mixed bag there. I’m not entirely sure what I feel about the style of it, but it’s mostly a good listen. Maybe you get used to it. Either way, the highlight of those 4 was the Agent Orange one, primarily because it’s the only one I knew nothing about other than it was something bad from the Vietnam war. 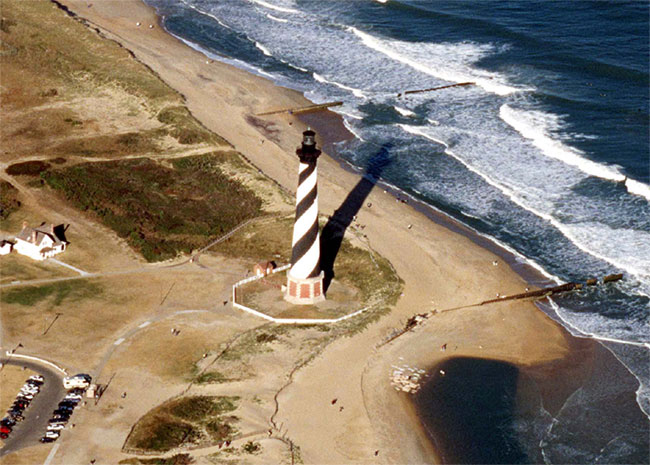 … back in the 1970s, it looked like Buxton might lose their beloved lighthouse. The sea was getting closer and threatening to swallow it up. And people were torn over what to do about it — they could move the lighthouse, or leave it in place and try to defend it against the forces of nature. For the next 30 years, the people of Buxton fought an intense political battle over this decision. It’s the kind of battle we can expect to see a lot more of as sea levels rise and threaten coastal communities around the world.

Having grown up down the road from Smeaton’s Tower – another lighthouse which was moved brick by brick to a new location, albeit a century earlier, in 1882 – I felt a certain affinity with this story. I’d never heard of Cape Hatteras before, but having checked on a map, I now know it’s a crazy looking piece of land. And there’s this lighthouse. Those are the only 2 things I know about it. Next time I’m in North Carolina, I’ll see if I can swing by.

WTF Episode 613: President Barack Obama. Clearly, this is an oldie, but I’d never heard it before and whilst going through the Marc Maron archives, I thought it seemed like a good place to stop off. Obviously, Obama comes off as being pretty cool, but I think the main thing that hits home listening to him today, is holy shit he’s not Donald Trump. The difference in how they hold themselves is so so so so massive, it’s unbelievable.

This American Life: The Ghost of Bobby Dunbar. Another oldie (think it was first broadcast a decade ago), this is an odd story of a boy kidnapped in 1912 and eventually reunited with his family only to find out that it wasn’t his family. It’s horrible when you actually think about it, but does make a pretty good story.

The Cipher: Ice-T. This is a wiiiidde ranging interview that really captures why you should respect Ice-T. Like, I’ve never been the biggest fan of his music – couldn’t really name more than a handful of songs off the top of my head – but listening to this interview made me want to go back and listen to more Ice-T. Despite currently only owning Power, I have been a longtime fan of Ice-T the man, and that’s solidified after this. Go listen.

About that massive new dinosaur found in Egypt and the team behind it, specifically that the women who helped unearth it had never been away from home before… That’s quite a first excursion.

[Dr. Hisham] Salam added that all the members of his research team where women. The research conditions necessitate traveling to a barren and dangerous area and staying there for at least a month. He said that he made a great effort convincing the families of his colleagues to travel and stay in that dangerous area.

He stated that these girls never left the city of Mansoura throughout their lives and this trip was a first for them, after a painstaking effort persuading their families, they agreed to let them travel and set up for 21 days in a dangerous area until the dinosaur structure was found.

My daughter is very excited about the prospect of a dinosaur bigger than Argentinosaurus (her long-standing favourite of all the dinosaurs). Still hoping she’ll have a dinosaur named after her one day.

This post about Artwork Personalization at Netflix, about how they decide which thumbnail from a show to display to a user, based on previous viewing habits. (Which, apparently they’ve been doing for a while now). It’s a very detailed explanation of something that had never really occurred to me before but makes perfect sense now that I know about it. Really interesting to consider the impact of this level of personalisation and guiding users down a path.

This hefty read on NYT – The Follower Factory – a fascinating deep dive into twitter bots, buying followers, all that mess. Also, it’s very well put together; a delight of an internet page, with all sorts of scrolly treats.

The day a non-league defender marked Aubameyang … after running a 10k. Catchy title. Sort of does what it says on the tin.

This advert for Lost from 2005 (via @gray on twitter). Reminding me why it seemed like such a good idea at the time to start watching it.

Beasts of The Southern Wild – a film sort of about Katrina, but sort of not really, but sort of really nice to watch. I liked it.